Wow time flies. It felt like only yesterday I was thinking that, "wow the first day of August is tomorrow!" And then I look today and it says it's the 4th of August already. I also have been seriously losing track of time since moving here. So it's no wonder that I usually think it's a different day or date. I least I get the month and the year right.

Today's temperature was 37 degrees Celsius, which means it was roughly 98.6 degrees Fahrenheit, with probably the humidity being up around 70%. Today was disgusting and uncomfortable to say the least. The air conditioning was finally turned on in the dining room/kitchen area at about 3pm, but until then there was no way to escape the heat, inside the house or outside the house. In some ways inside the house is worse because the air does not move as well inside rooms, so you usually feel like you're trying to breath in very hot, thick fog into your lungs. Bleh. But I soldier on. I just hope my health isn't in danger...

So anyway, I told you that I would be recalling several trips I just took recently to different places around the Mie prefecture. A couple of weeks ago, a family friend by the name of Mrs. Nakae and her daughter, Tomomi, decided to take Takeshi and I out for a drive to visit some different places around Suzuka. This event was brought about mainly because Tomomi had wanted to meet me after hearing that Takeshi had married an American girl. I had met her mother a few times before, but not her daughter. Tomomi's English skill was quite good, and she told me that this was because she (and her family I presume) had lived in Canada for two years. She probably went to school there, and she said that she had even acquired a Canadian boyfriend at one point. She told me with a shake of her head that she wouldn't want to live there again because of the cold winters there! No wonder. Tomomi and her mother look so much alike, and are very laid back (when it comes to your normal Japanese person in the presence of a foreigner). They had been told, or had learned that both Takeshi and I had an interest in photography, so they decided to take us to places where we could let go and be the photography geeks that we are. This was no problem with us, because we also wanted to get out of the house that day; one, because it was immensely hot inside as usual, and two, because we hadn't gone anywhere in a while.

So we scrambled into the back of their car and drove away towards the nearby mountains. Our first destination was shrine grounds located at the base of one of the many mountain chains surrounding the area. To get there, we left the city limits with it's restaurants and malls and into the farmlands with rice patties stretching out far as the eye could see. Like little islands, clumps of humble homes sat surrounded by the fields of rice patties, tea bushes, palm trees, and other various produce. At one point I was reminded of some U.S. states in the west where there is nothing around you, as you drive along a tiny road. Finally we started to climb higher in our car, through tiny towns no bigger than 15-20 buildings, and on streets which were so narrow that at some points, the low stone walls in front of the houses threatened to smack the rear-view mirrors clean off if you turned the wheel just a fraction more to the left or right. We reached our destination at the end of a long, steep, narrow road which led into the mountain woods. There, we pulled into an small unpaved parking lot right in front of the first of the shrine buildings. The trees were unbelievably tall and straight as a ruler. The area was so close, and you could smell water, musky earth, and incense in the air. As we left the car we spotted a possible priest(?) of the shrine grounds being led to a car by an older man, the car's owner. The man's wife stood beside the car. The priest then proceeded to speak a chant in front of the car, which I can only assume where prayers over the car. He circled it many times, slowly, and paused over each side of the car for a moment in his chanting. I interpreted this as a possible way to "bless" the car, perhaps to ward against future possible car accidents? Perhaps a good luck prayer for a newly bought car? 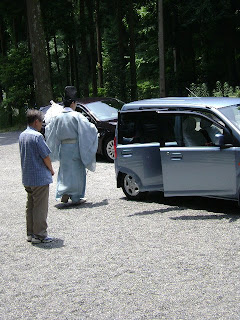 We made our way into the grounds and up the mossy path towards more buildings. At Japanese shrines like this one, I always am able to totally feel the ancient air of it. To know that Japanese citizens in past feudal times may have taken the same steps as my feet do on the cleared paths between tree trunks and stone lanterns. Shrines are always very peaceful and beautiful places to me. At one of the shrine buildings we found the usual memorabilia which the shrine sells to all its visitors; little tokens, prayer pouches to put in one's purse, prayer tokens for cellphones, etc. 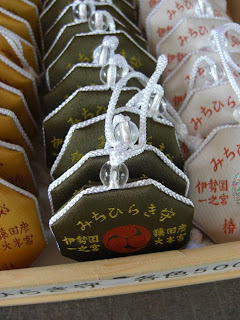 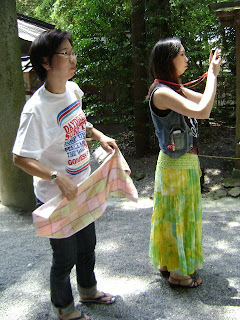 Mrs. Nakae and her daughter, Tomomi 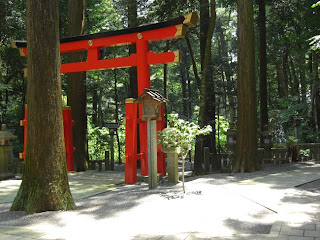 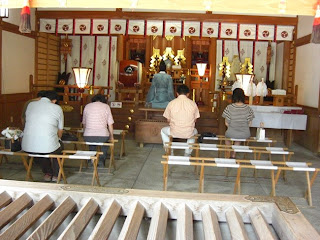 After leaving the shrine grounds I thought that we would be heading back to the house, but Mrs. Nakae said she then wanted to take us somewhere else. Takeshi was unsure of what exactly it was, but he told me that she said something about a river that was really clean. Our second destination was a quite large park of sorts, again located in the mountains. After passing through a small entrance, we drove up another narrow, semi-paved, road with twisted and turned through the woods. Our car hugged the side of the mountain's hills and earth on the right side, for on the left side of us, the earth dropped off completely and led to a steep fall to a distant river below, through the trees. The river was plastered with boulders and rocks of all sizes, and the water ripped through the maze of stones, downstream. We drove higher until along the road we spotted a cleared area in the grass off to the side where we could park and look around. right in front of the space where we parked was a tiny path no longer than a couple feet, which led down to the river itself. We took several snacks and drinks, that we had bought earlier at a convenience store, with us from the car and proceeded to wind our way through the rocks to the water. The spot we picked was very nice and secluded with a lot of shade from the overhead trees. I have never seen water so clear before, for sure. You could spot every little pebble and fish in the water. We spent about an hour wading around in the water, which in some places came up a little past my knees (because I'm short...). Takeshi and I wandered everywhere taking pictures of course. Not once did we see anyone else in our area at all; only a few more parked cars along the road on the way up. 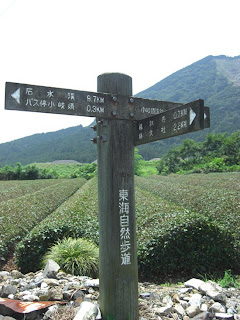 On the way up to the river, with a field of tea bushes behind the sign. 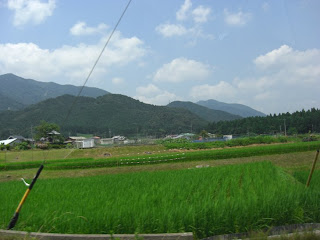 A tiny grouping of houses in the distance. 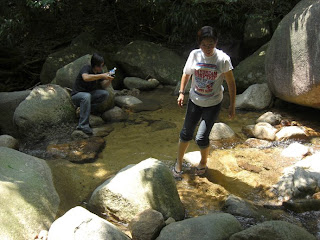 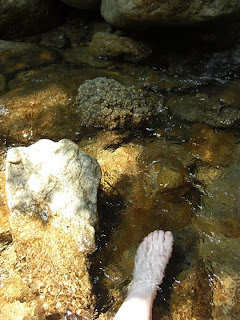