That's pretty much describes my life now, with the 2 jobs and everything else I need to do that's not work related. Things are going well for the financial situation. We've saved a LOT in the past month. The part-time retail job has increased my hours due to them losing about 6 people who went back to school/college. And my design job has definitely upped the number of projects that are "high priority" and need to be done, "oh, by next week." Don't get me wrong, I kind of have begun to like the chaos of having an overabundance of design projects to get done for them. It's just that sometimes people don't know that design. takes. time. I try to go as fast as I can, while still creating material that they/I can be proud of.

What happens though, when I need to get shit done for them, is to still on my round butt in-front of the laptop for hours (on-site and at home). When I'm not doing that, I try to get housecleaning done. I'm still the only one who can really get that stuff done. Just recently, I was finally able to take some time and do a quick vacuum of the apartment. Yesterday I had a few minutes to clean/scrub the kitchen sink.  Sometimes I feel like the only exercise I get is at the part-time gig. Starting this week, some of my "new hour" days consist of me coming in to "do the truck". Coming in at 5:30AM. (X__X);; I usually drag my sorry ass out of bed at 4AM. But on the brighter side, I get some time to move around, unpacking things from boxes, running them out to the shelves, moving items around, and I get out at 10AM. I do this, so far, on Tuesdays and Thursdays. And on Wednesdays I wake up at 6AM to go to Annapolis for the design job. So straight 3 days of EARLINESS for me. Whew.

Hub has been equally busy with his work, since they've put him back on 6 days a week now. Mondays, again, are our only full days spent together. But we're both working hard to save money, and so far it looks like it's happening. Which is something to be grateful for. And to keep busting our butts for. So I can....get me' a DOG finally! >__> *Sob* I want one so bad.

Plants are all doing well. The bell pepper plant is about to bloom! :) I might have to transplant that sucker though, to a bigger pot again, since I'm not sure how big the peppers could get right now. But we'll see.

In other happy news - Takeshi finally FINALLY got to speak to Tousan on the phone the other night! Since we've moved back to the States in 08', he hasn't been able to hear FIL's voice. Only emails. Tousan likes to be anywhere but at home, on his days off. So he'd NEVER be there. Most of the time he would call home in Suzuka, Baasan would pick up. Cuz' she stays home, does chores, and then watches TV for 5 hours a day.

FIL said that he's thinking of visiting us in May of next year! Which would be so cool. (I'd rather visit THEM in Japan though lol) He might be able to bring SIL and MIL as well. Fingers crossed. But this means that I'll have to brush up my Japanese! :( It blows that I haven't had the time to truly continue to study the language. Sigh. I DON'T want to be like this forever - not being able to hold a conversation with my in-laws (except SIL knows some English). And where hub has to be "the translator" all the time. Well, when we finally get some concrete dates from FIL, that'll be my green light to buckle down as much as I can!

So I'm finally uploading these few photos I took during our recent day trip to Lancaster, PA (where we used to live while I was in college there). We arrived on a Monday evening, spent some time at our old favorite cafe, went to a hotel in town, woke up early on Tuesday for the farmer's market, and left at about noon. But hub got to enjoy the rest of his day off, while I went to work at 5pm. Bleh. >__<

It was great seeing old places again, but that hotel we had stayed in downtown was a piece of crap. An old, mildewy piece of crap. We had never stayed there, and only did because it was close to everything in town. And it was only for 1 night, so why not. An old desolate place, with dust caked on light fixtures, & stained carpets. It looked like the place was being prepped to be a haunted house amusement. The first key they gave us ended up being to a room that wasn't even fixed up yet, with frumpy, rubbled bedsheets, a pile of towels on the floor in the bathroom, and a CREEPY white-bar baby crib along one wall. UH. NO thank you. We went down and got another key, to a room which was fixed. TV had no working channels though.

Farmer's Market the next day was wonderful. We got to wander past all of the stands of produce, nuts, breads, preservatives, and Amish quilts. Hub, being the chef that he is, was very excited by many things, and bought some produce. We also bought a small rosemary plant, to add to our garden. :) 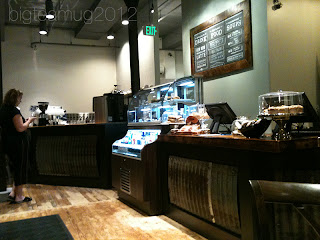 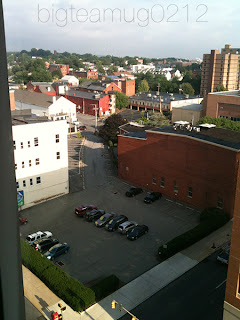 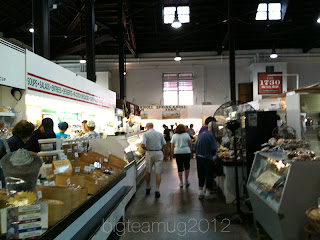 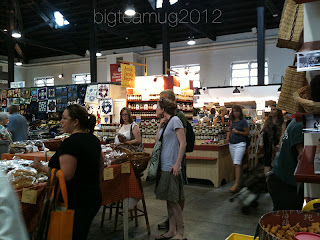 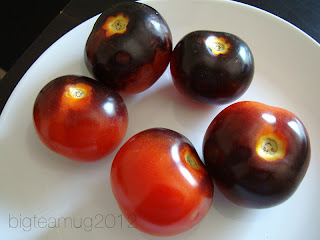 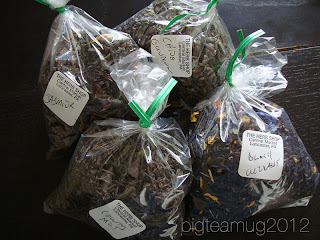 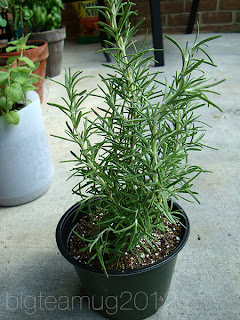 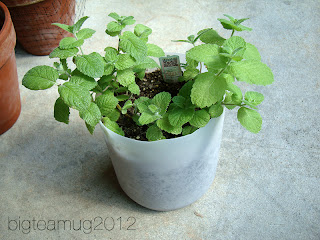 Apple mint is growing and growing! 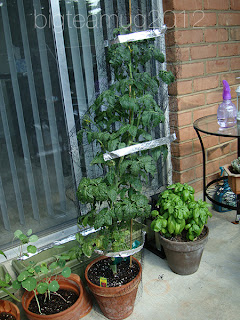