I've been busy with my first two weeks of my new job! Today was the half-mark of my 2nd week. About 2 more weeks to go until I'm officially an employee, not on the payroll, no perks yet - right now I'm a "contractor". Last week was a little tough, being the first and all. Lots of pressure, TONS of stuff to learn and try to memorize. My new boss-lady said that they usually end up hiring people who are "achievers" and want to know everything right now, and thus can be quite hard on themselves. WELL, it only took me until the 3rd day of work to have a bout of weepiness in the car ride back home, after a day of a few more learning-hiccups than usual. That's me - hard on herself. Why? Because I hate being the new person, and I hate having my hand held in a professional workplace at the age of 25!! Argh. That's meee. :D

So since my new schedule began, TK and I have, as expected, no days off together. It's usually me kissing a still-sleeping hub in the morning when I wake up at 6am - and MAYBE seeing him get home early before midnight - which is the LATEST I'll go to bed these days. Yessir, no more saying up till 1-2am during the week for me! Besides, I'm usually SO frickin' glad to see my bed at the end of the night these days. I definitely fall asleep faster, so far. I am NOT a morning person.

6:00am is NOT the time for Laura to be feeling like she wants breakfast. BLEH. I hate looking at food that early. I try to muscle down a little bit of cereal at least...

So now that April is nearly here, we're starting to think of moving....where to go in northern VA, what we could afford, what hub's going to DO?? What's his next job??

I haven't actually SPOKEN to him face to face since.....uhhh >__> *thinks* Monday? Something like that. :/ At least a couple days. Tomorrow is his day off, so I'll get to see him when I get home at around 7pm. Yaaay!

Have a good sleep everyone. I'll be in up in another 6 hours!

So it finally happened. After about 2 whole years of wavering hope, and continued emotional hardship, I've landed a full-time job. It still feels a little surreal. I guess I'm just so used to defeat. It's not located in Frederick, though, but in Chantilly, VA. A stipulation of the contract/offer letter I signed states that I relocate to either DC or VA within 90 days of my start date, the 12th of this month. That puts our moving deadline to June 12th. It had originally been 60 days, but I called my future boss and asked her to extend it. just to give us more time to save up a little more money for the move. The apartment we're in requires us to give a month's advance notice of early termination of our lease, and a whopping 2 month's rent = about $1,900.

Just to get OUT. That sucks. There's no doubt that our savings will dwindle even further, to make this "last hurrah" happen. After that, we definitely won't be ABLE to move anywhere else for a while. I just hope that with 2 salaries this time, we will be able to replenish our savings more quickly. Takeshi has been happy for me, I think. But he is concerned about our financial future, etc. as always. The problems don't stop just because I've got a job now. And he still has to stay at this current job which he f*cking LOATHES.

I, at least, take a small comfort with the knowledge that because I was able to get this job, he will be able to finally leave that place. I just HOPE that his next job, whatever it is, treats him better. For both our sakes. Seeing him miserable makes me miserable.

Another HUGE bummer about my soon-to-be new work schedule - is that we, for the time being, will never have a SINGLE WHOLE day off together. None. I will have the usual Saturday and Sunday off. He will have 2 weekdays off. This past Monday was our last full day off together, so we planned on taking a trip down to Alexandria (our previous stomping grounds) and visit his old restaurant and a new place the owners had opened in Old Town.

It didn't help that the night before, when he got home, we ended up in a HUGE fight. It started out with me getting on him a little about drinking 3 beers at work (with a friend who had come to visit, I learn later), and then driving home. I may have overreacted but I was JUST concerned.

He took this as me not wanting to let him have a LITTLE time to himself and chill out, to escape the shitty reality that is his job, etc etc. Which I try to explain to him that that was NOT was I saying, blah blah, YELLING, grief. Then it devolving into the same old arguments, me not washing dishes when I should, his crappy job, worries about finances, worries about his career, ETC.

So we went to bed silent - me in bed - him falling asleep on the floor in the living room. I covered him with a blanket at least, later on...

All of the arguing kind of followed me into the next morning though. I guess I just kind of, snapped. Not 5 minutes after I get up and start getting ready for our day trip, that I'm already in tears. I'm thinking, "This is our LAST day together who the fuck knows HOW long - and all we did last night was argue." Despair, despair, weepiness. We drive there, and I'm in tears the whole way (which was not the greatest thing, because I was driving...). Hub at this point is cooled down, and is trying to make me feel better, but I couldn't be consoled.

So we're walking around Old Town later on, and I'm in a haze. It didn't help that it was really chilly with a wind that day! Not a great day for walking outside.

We eat lunch later on at hub's old restaurant, and it was SO SO nice to see his old kitchen "family" there, the other chefs we got to know when he worked there. They're such nice people. They came out to see TK while we were waiting for our food, 'cause he's the man and all, and two of the guys gave us hugs. I really HUGGED them back, I needed it. It was nice to have that friendly, warm touch you know? It was comforting to me. It makes me wish we had never left there (if other circumstances had been better).

So, I finally reverted back to my usual self after that, and we had a good rest of the day, for the most part.

Another thing that's been eating away at me just recently, is the topic of my in-laws. Hub and I were talking the other night, just reminiscing about Suzuka and such I think. Also, before that, he had ended up calling home and caught my MIL, and did some catching up, telling her about my new job and such. I didn't catch much of what they talked about on the phone, so hub filled me in for the most part.

TK was musing on the cultural and age differences between us and my MIL. He said that the way she thinks about certain things are a little "old school." I guess that she had asked the question (when told about my getting the job) "Why are you trying to do it all?" I think that he said that she thinks that I should just find a good "whatever/non-design" job to support the family, and not try to "do it all" with my career.

Y'know to be the supportive wifey and all? I feel that she may see me as a person who's trying to exceed their reach, who's chancing the "dream" of getting a job that I want to do. A BIG factor of this thinking as well (I believe) is that, when we lived in Japan with them - I never had a job. I was never seen as "a worker". My reputation, I believe, is still not to good with them, since the last time they saw me.

I didn't have a job, I couldn't speak the language well, they didn't understand me sometimes, I wasn't a hard worker like them, with chores and housework. I probably slept longer than they thought I should. In short, I think that they thought (and still think) I'm lazy. That I can't be counted on.

They haven't seen me since then. So, to them, I'm still the same weird, lazy gaijin girl that their son has to deal with, and who doesn't support him as much as I should.

I've always wanted them to like me. I've always thought fondly of them, I've missed them. But know this feeling is punctured with the thought that they might not even like me. I don't know for sure.

This might all be me getting too weirded out by my MIL's statements to hub over the phone. But he said he even tried to explain to her our feelings on careers/happiness/fulfillment in such things - and she didn't really understand.

I still hope to see them again soon in the future, but I'm sure that these feelings/wonderings I have now will surely be with me then.

Photos of some cool presents I received for my BDay! 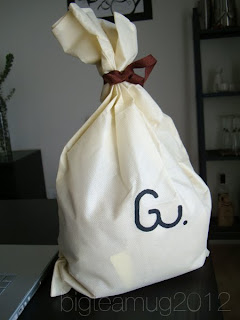 My SIL and MIL shipped me a present from Japan! I loved seeing the delicate and pretty packaging typical of all kinds from gifts back home. 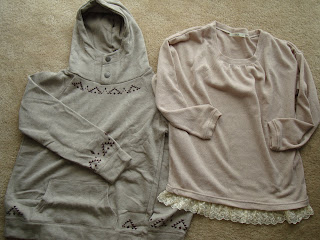 Inside were these - a 'blouse' made of such fine delicate material, and a thin hoodie. I love the colors! It reminds me of the store Muji. :-) 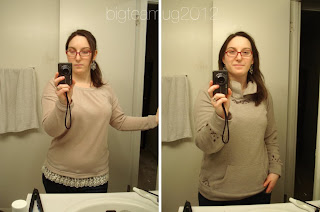 And this is how they sit on me. I was so glad they fit! Japanese women have small shoulders compared to big ole' gaijin shoulders lol. I won't even talk about buying PANTS in Japan. >__>;; 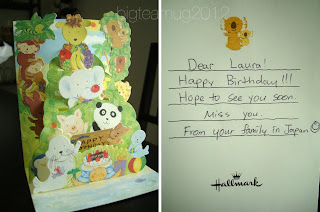 Hub got me something I had wanted to buy for myself for Christmas originally, but was so surprised when he handed it to me for my birthday! It brings out my inner art-geek. >__> A MONSTER of an art history book "The Art Museum" by Phaidon. This thing weighs 18lbs. (8 kilograms) and is a large print book. Big beautiful photographs of art pieces and artifacts dating from the stone age up through the modern era. I love it! It doesn't exactly FIT on our bookshelf (no duh...) so for now, it's gently leaned up against the bookshelf on the floor. Hehe. 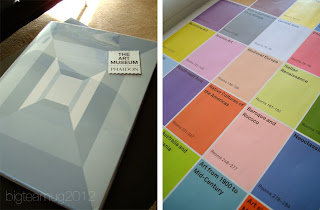