So it's another "catch-up" post after being bad and not posting for a while. D: Sorry, to whoever still reads this blog lol.

So lotsa stuff has happened since I posted last; good and bad.

We finally got a dog! :D 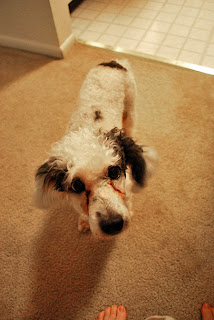 His name is Percy. He's a 4-year old (soon to be 5 in December) Parti Toy Poodle. Funny that originally, I hadn't applied for him online! We had inquired about another female toy poodle in the area - met with the foster mom and whatnot. In the end, the foster mom told me that we wouldn't be the best fit for the dog because she needed someone who only would be away from home for about 3-4 hours per day (whaaa??). Instead she told me about another poodle she had met recently, through her girlfriend who also fosters dogs. Percy was originally from Ohio, where he was owned by an old man with Parkinson's Disease. After not being able to take care of him anymore, Percy was given up to a shelter. That's where Debbie, the foster mom, found him and brought him in Maryland.

I went to meet him at the farm he was staying at (dog's heaven, right?), and it was so pretty there. Percy was running around with a little pack of pups there: 2 Pembroke Corgis (OMG LOVE), a big mix dog, and 2 Bichon mixes.

So long story short, (and after an over night "try-him-out" stay) we ended up getting him. $300.00, not too bad. It's been fun seeing hub really warm up to Percy, since TK did not grow up with any pets.  wasn't sure how it'd go! Lol. Unfortunately the pup has cataracts in his right eye and has no vision in it anymore. We're not sure how it happened or when - perhaps just hereditary. We'll also never be sure of his actual birthdate. His paperwork from the shelter only says "4 year and 10 months old".

So he has a wonderful temperament - only thing is that his owner NEVER taught him basic obedience, like "sit" or "stay". Percy's original name was Cuddles (eww) so we had to work the first few days with just teaching him his name!

So he's just now really settling down, getting used to our schedule. It's so nice to have a dog in the home again (for me - since my parents house). He frustrates me somedays, but he is a sweet boy and he makes us laugh for sure. ;) 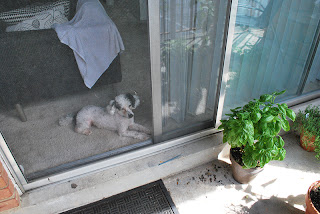 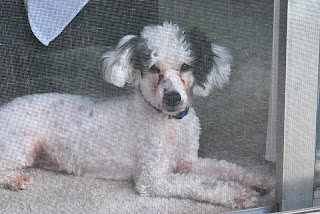 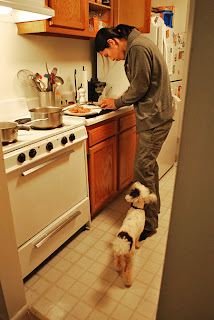 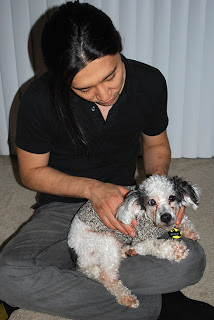 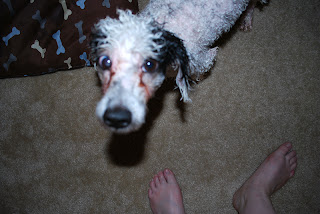